Understanding the Blend-If Slider in Photoshop

The Blend-If slider is one of those tools in Photoshop that I avoided for quite some time.  It seemed to be a little too complicated for my little brain to grasp.  However, once I finally saw it in action and saw what it could do my curiosity pushed me to dig a little more.  In reality, this tool is fairly simple.

I always thought of this tool as a way to use blend modes, but as it turns out it's not related at all.  It does have the effect of blending two layers together, but not the same way as blend modes.  When you look at the tool you'll notice that the sliders have the same layout as a standard histogram.  On the left side is pure black, or a value of 0 and represents the shadows in the image while the right end of the slider is pure white with a value of 255 and represents the highlights in the image.  By moving those sliders inward, we are changing the black or white points.  Basically, it is a way to remove specific tonal values from the current layer to allow the layer below to show through.  For example, if I push the highlight slider to the left toward the shadow end to a value of 180, the tonal values of the current layer will be affected by pixels with values of 181 to 255.  You will see this exact effect in the examples below. 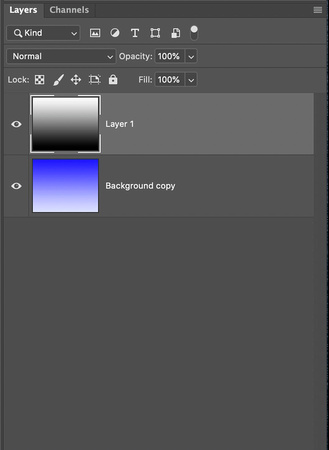 Layers for our examples

The idea is to blend these two layers together by removing specific tonal values from the current top layer.  If you don't have two layers the result will be transparency where the tonal values are removed.  Once you have two layers in the layers palette open the Layer Style dialog box.  You can do this many ways, but I usually just double click on the layer (not the thumbnail or the label, but next to the label).   Once the Layer Style dialog box is open go to the bottom where the Blend-If section is (see below). 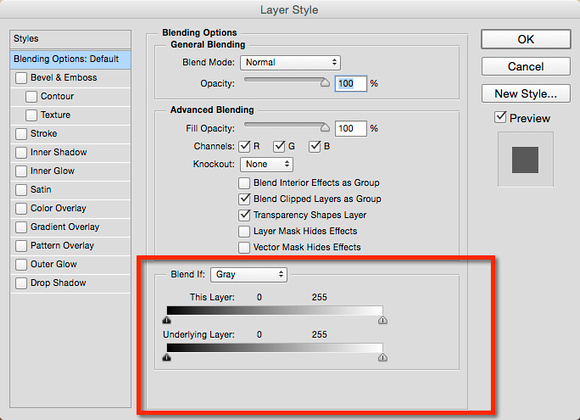 The first thing you should notice is the Blend If drop down menu.  This menu has four options, Gray, Red, Green, and Blue.  What this allows you is the ability to work with Black and White (the Gray channel) as well as RGB colors.  So ideally with these you should be able to blend all of the colors you need.  However, let's start simply by using the default of Gray.  Of course this means we will only be affecting different shades of gray, but I think that's probably the most common use.

With the top layer selected (Layer 1) double click anywhere to the right of where it says "Layer 1" to open the Layer Styles Panel.  It defaults to the Blending Options style which is where the Blend If lies.  Let's click and move the highlight slider (for This Layer) to the left to where it gives you a value of 180.  You will see the white tonal values above 180 in the current layer begin to fade away and reveal the blue from the layer below. 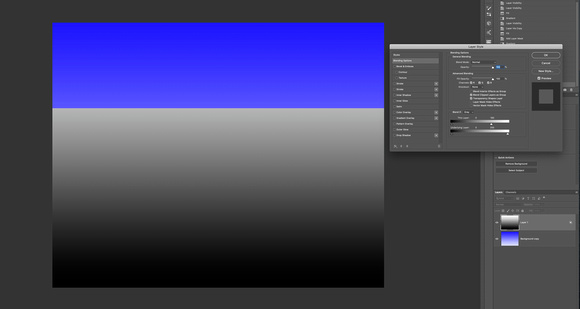 Now let's do the same by moving the shadows slider to the right to a value of 60.  This time you see the blacks in the image with a value of 59 and lower begin to fade away and reveal the light blue in the image in the layer below. 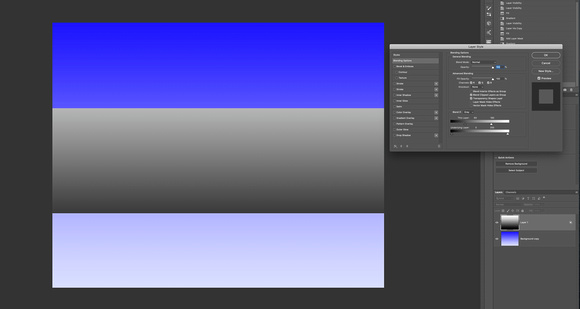 Black and White points have been adjusted show the layer below

Just so you can see exactly what's happening, click OK in the dialog box to return to the layers pallets.  Now turn off the below layer by clicking on the eyeball icon on that layer.  What this reveals is that the current layer is partially faded away (see my example below) exposing the transparency below. 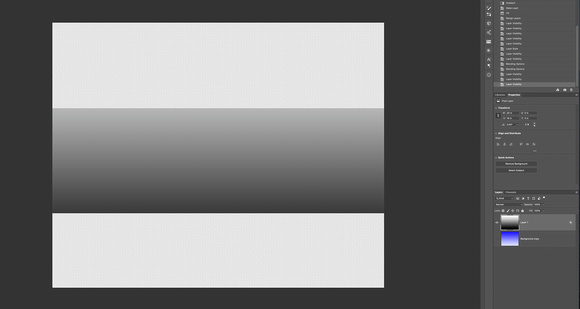 Pretty easy to see how the slider for This Layer works.  Right?  Well how about the slider for Underlying Layer.  With the same image selected we'll go back to the Blending Options by double clicking on the area to the right of the Layer 1 label.  We'll reset the sliders for This Layer by moving the shadow slider back to 0 and the highlight slider back to 255.  This way that slider will not affect this example.   Now click on the highlight slider for the Underlying Layer and move it to 180.  Notice how the bottom of the image fades into the light blue of the layer below.  This is because the reference point is the underlying layer and the tonal values of that layer that are above 180 fall in the light blue.  So that is the area that is removed and blended into the current layer.  A little confusing, but once you get it you'll think it's simple. 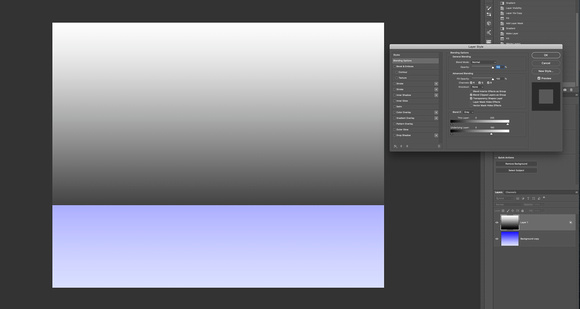 Notice how different this is from what happened when you did the same thing with the This Layer slider.  See the comparison below

Just think about which layer you want it to use for referencing the highlights or shadows slider.  If you use the This Layer slider you are referencing the current layer's tonal values to determine where you want the pixels removed.  So if you change the highlight slider to 180 you are telling it to remove the pixels that are associated with this layer's tonal values that are greater than 180.

One more thing I haven't mentioned that is key in the use of this tool.  You have probably noticed the hard line between those pixels selected and those that are not.  As I said earlier, when you select a highlight point of 180 it means that every pixel with a tonal value of 181 or above is removed and every pixel of 180 or less remains.  There is a way to gradate this where the transition is smooth and you have the ability to determine how much of a gradation there is.  To do this let's go back to our last example where we moved the highlights for the Underlying Layer slider to 180.  Now press and hold your Option/Alt key and grab the left side of that slider and move it to the left.  That will separate the slider into two parts.  Move the left hand part of that slider to 160.  That will create a gradation of 20 pixels. 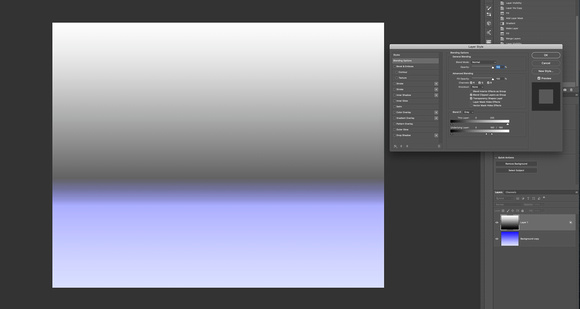 Breaking the slider to gradate the effect

We have only scratched the surface of this tool.  I find myself using it more and more now that I realize how it works.  It seems fairly complicated when you first try to use it but it's really fairly simple.  I hope this had been informative and helps break down that frustration barrier.