The Basic Components of Good Exposure

The basic tenant of photography is understanding light.  This means understanding what kind of light, where the light is coming from, and how to use the light for exposure.  To accomplish this you must first understand the three components of exposure:  Shutter Speed, Aperture, and ISO.   Not only must you understand what each of these do but, more importantly, how they work together.  Let's first talk about each of them and then we will talk about their effect on each other. 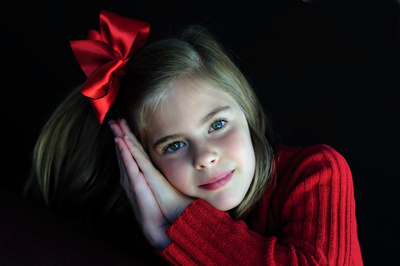 Picture of my granddaughter. One of my favorite first studio shots.

Just about everyone can relate to shutter speed.  You see amazing images of hummingbirds shot at 1/5000, or faster, that stops the motion of their little wings.  You see race cars speeding around the track at 200 miles an hour that are stopped using a fast shutter speed.  You also see amazing landscape images where the waterfall looks like silk or the lake looks very smooth and glassy.  This effect is due to slower shutter speeds allowing the motion to blur.  In short, shutter speed is how long the shutter remains open to allow light to expose on the sensor.  Think of shutter speed as how you will deal with motion in the image.  As indicated above, if you want to stop motion you need a faster shutter speed, but to blur motion you will need a slower speed.

The second aspect of exposure is Aperture.  This concept is a little harder to grasp but still fairly simple once you get it.  Aperture is basically how big the hole is in your lens that is letting the light into your camera.  The bigger the hole the more light is being exposed on the sensor.  So how should I use Aperture to create amazing images?  There is a concept called "Depth of Field" (DOF) that is important when thinking about Aperture.  DOF is the area, or plane along your image, that is in focus once you have focused on your subject.  For example, let's say you are shooting a portrait outdoors.  You decide to open up your Aperture as big as it will go to let in as much light as you can.  Now you focus on your subject.  As a result, you will have a very narrow DOF.  This means most of the area in front of your subject and most of the area behind your subject will be out of focus, leaving a very narrow area in focus around the subject. Conversely, if you close down your Aperture to reduce the light you will have a much broader DOF and much more of your image will be in focus.  This concept is how photographers capture those amazing portraits where the subject is in focus and the rest of the image is blurred.

Back lit image with speed light to light the subject

Finally, the third aspect of exposure is ISO (International Standards Organization).  If you were around in the film days you will probably understand this a little easier.  Basically, ISO is the sensor's sensitivity to light.  In the film days it was how sensitive the film was to light.  The more sensitive it is the less light will be required for exposure.  For example, an ISO set at 200 requires less light than an ISO set at 400.  So why should I care?  Shouldn't I just set it at the highest ISO allowed?  Well the answer is that the higher the ISO the more potential for noise, or grain.  In fact, the highest setting will most assuredly introduce grain into the image.  However, that may be OK.  It just depends on your use of the image. Usually it's best to have the ISO at the lowest setting that still allows you to have a good exposure.

Now that you understand what the three components of good exposure are let's talk about how they work together.  A perfect exposure is the combination of shutter speed, aperture, and ISO where the three are used in unison to create the image.  The length of time light is exposed to the sensor, the amount of light that is sent through the lens, and the sensitivity setting of the sensor can be measured to obtain a good exposure.  Typically this is accomplished with your camera's light meter.  Once a good combination of these three settings is obtained the camera alerts you that you will have a good exposure. It's up to you to be sure that the combination of these settings will reflect the desired result.

The following discussion regarding how the components work together assumes that you are shooting in manual mode with your camera, but you certainly do not have to.  It's just a little easier to explain how everything fits together.  There is and will always be differing opinions on whether a photographer should shoot in manual mode or one of the automatic modes.  That's a topic for another discussion.

The first thing you should ever think about before shooting an image is what you are trying to accomplish.  Then you should determine which of the three components is most important.  For example, if you're shooting a sporting event you may decide that the shutter speed is the most important.  On the other hand, if you are shooting a portrait you may determine that Aperture is more important.  ISO should only be considered as most important if you are shooting in low light or if you want to introduce noise in the image to give it a more retro look.  Otherwise, a low setting is always preferable.  Once you decide which of these three is most important for your situation you can set your camera to the desired setting for that component.  For example, you may want to set your shutter speed to 1/1000 for a sporting event.  Next, you have to set one or both of the other two components, Aperture and ISO in this case, to a setting where the camera alerts you that a good exposure will be obtained.

Continuing with the example above, let's further say the sporting event is outdoors and at night where the lights may not be so good.  Since the shutter speed is fairly fast you may not be letting in enough light.  Therefore, you will need to compensate with your Aperture and/or ISO.  Opening up your Aperture all the way may not be desirable, or may not give you enough light.  As a result, you may need to increase your ISO to make the sensor more sensitive to the light you have.  Again, once you have a good combination of the three the camera's light meter will alert you that you have a good exposure. 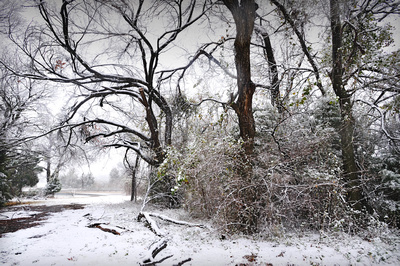 We rarely get snow in Texas. This image was taken about a mile from our house just outside of Dallas. Looks fairly rural, but it right in the middle of a very urban community.

Snowy landscape shot with a slow shutter speed on a tripod

This discussion could go on with multiple examples, but I think you get the point.  Determine what you want to accomplish, then adjust the component to drive that result, and finally adjust the other two components until you get a good exposure.  It seems really simple, but can get fairly complicated if the adjustments of the other two components yield undesirable results.  For example, if you want a very broad depth of field and close down your Aperture you are not letting in much light.  To compensate you may have to let more light in by slowing your shutter.  If you slow it too much you may not be able to hand hold the camera without having blurry results.  This is the type of thing you need to watch out for.  If slowing the shutter is not an option you must consider raising the ISO, or narrowing your depth of field.

Hope this helps those of you that have not been exposed (pun intended) to the three components of a good photographic exposure.  Let me know what you think.