So you're always hearing photographers talk about stops of light and making changes to exposure based on that to get certain affects, but you never really understand what they're talking about?  Well I thought I'd give you a little bit of a discussion on how this works so you can, at least, be in the conversation.

If you think of F-stops, or stops as they are usually referred to, as "measuring units" then you're already well on your way to getting it.  The problem with most is understanding how to use these measurements.  How much you make changes to exposure is measured in stops.  Any time you change exposure to double the amount of light you are exposing to the sensor it means you are adding one stop of light.  Conversely, if you change exposure where you are halving the amount of light it means you are removing one stop of light.  Anything in between are fractional stops.  Basically there are three ways to control exposure with your camera.  These are shutter speed, aperture, and ISO.  So let's talk about F-stops for each of these and then we'll bring them all together.

First we'll talk about shutter speed.  It's probably the one everyone can understand the easiest.  If you change your shutter speed from 1/500 to 1/250 then you are adding one stop of light.  This is because your shutter is open twice as long.  On the other hand if you change it from 1/500 to 1/1000 then you are removing one stop of light because you are leaving it open half as long.  Pretty simple.  Right?

Understanding stops with ISO is also fairly simple.  For example, if I want to change my ISO from 200 to 400 I am making my sensor one stop more sensitive to light allowing it to expose where the light is not as bright.  So, of course, this means that if I change it from 200 to 100 then the sensor will be one stop less sensitive to light.  Again, pretty simple.  Every time you double or halve the number you are changing the exposure by a stop.

The more difficult one to understand is aperture.  The measurement of these stops have a sliding scale that's a little difficult at first to understand.  Just like everything else, though, once you get it it's pretty simple.  As you probably know, the aperture is the opening of the hole in the lens that exposes light to the sensor. The sliding scale for measuring stops of light for aperture is the same for all lenses but where the scale starts and where it stops depends on your lens.  Theoretically scale goes from 1 to about 44 and beyond.  However, while some lenses exist on this scale they're not the norm, especially for 35mm cameras.  In reality, the scale goes from about 1.4 to 32.  With this in mind there are two aspects of aperture that are somewhat difficult to grasp at first.  One is that the lower the number the more open the aperture is to expose light to the sensor and the higher the number the less open it is.  It's a little counter intuitive but once you get it you're good.  The second difficulty is how to count stops of light for aperture.  Again, it's fairly simple once you understand how it works.  Think of a number line that starts at 1.4 and the second number is 2.0.  Starting with 1.4 and moving to the right, every other number on the number line is double the number you started with.  So 1.4 goes to 2.8 (the 3rd number on the number line), while 2.0 goes to 4.0, (the 4th number on the number line).  If you continued you would get a number line like this:  1.4, 2.0, 2.8. 4.0, 5.6, 8.0, 11.0, 16.0, 22.0.  So moving to the right every other number is double and moving to the left every other number is halved.  Notice it's not always exact.  For example, doubling 5.6 should yield 11.2, but the correct number is 11.0.  Just to clarify the concept of aperture F-stops, if we start at 2.0 and close down the aperture by 2 stops we would be at 4.0.  That's two slots (or stops) down the number line. 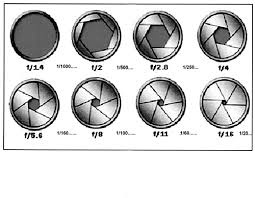 Here's a nice little image to help explain this
(courtesy of absolutelyfreeonlineclasses.com)

OK, so now that we know how to measure stops with each of these how do we use them together?  It's fairly simple.  If you change one of these by a stop you must change one or both of the other controls by a stop in order to maintain the same exposure.  For example, if I decide I want to narrow the hole in the lens (aperture) by a stop then I must compensate and add a combination of one stop from the shutter speed and ISO.  You may ask, "Won't my camera tell me when there's a good exposure?  Why do I need to know how much to change one of the other controls?  I'll just change it until the camera tells me there is a good exposure."  While this is true if you are shooting in one of the automatic modes, it's still a good idea to know what will happen when you make a change.  For example, if you're using shutter priority mode with an exposure of 1/500, F5.6, at ISO 400, and you increase your shutter by one stop (1/1000) then you must bring in more light.  Shutter priority will increase your aperture size to F2.8 in this case.  Increasing your aperture by one stop may not give you the desired result.  In this case it is narrowing your depth of field and you may not be able to maintain focus on your subject.  So you may want to increase your ISO instead.  Knowing how the changed aperture will affect your image and how much you must change the ISO is helpful to understanding how your exposure will be affected.  This increased knowledge will definitely help you in achieving your desired results.

When I think of this subject I usually think of Zach Arias.  This guy is an amazing photographer from Atlanta.  He did a workshop on Creative Live a few years ago that I purchased and watch from time to time.  It's called "The Working Photographer".  It covers many topics but one of them is the concept discussed above.  He calls it "The Reciprocals".  It's called this because when you change a component of exposure (shutter speed, aperture, ISO) you must change one or both of the other components in the opposite direction.  To do that you must understand F-stops so you know how much to change them to maintain a good exposure.

So if you're a casual shooter, this topic may not be important.  However, if you're aspiring to become a professional, or just want to shoot better images, then it is very critical that you understand this.  It's fairly simple and the more you shoot, the easier it will become.  By not understanding this concept you are taking chances and basically guessing at what to do for your desired result.

Hope this helps and happy shooting.