A Basic Review of How Cameras and Lenses Work

Whether you are just beginning in your photography or a seasoned veteran it’s good to get a grip on how cameras and lenses work.  In this post I want to give you a fairly high level understanding of the mechanical operation of these.

DSLR’s (digital single lens reflex) cameras are designed to allow you to see, in real time, what the sensor will record.  When you press the shutter release the mirror moves out of the way to allow the light coming through the lens to expose the sensor.  The construction of the system that allows this process starts with the viewfinder.  When you peer through the viewfinder you see the object through the lens, but it is being reflected via several optics.

First, your eye sees a Pentaprism that bounces a couple of times and directs your view to the mirror.  This mirror sits in front of the shutter and reflects through the lens to the subject (see image below). 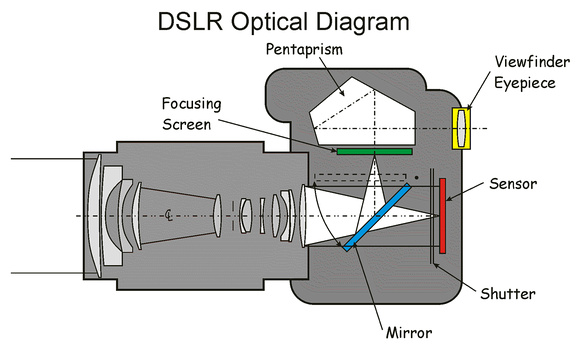 Inside the lens you have several optics as well.  If the lens is a zoom there will be additional optics to allow you to adjust your focal length.  This occurs by allowing you to twist a ring around the barrel of the lens, thus moving one of the optics back and forth in the lens to zoom in and out on the subject.

A second ring around the barrel of the lens allows you to move another optic in the lens to control focus.  This optic also moves back and forth inside the lens and is available regardless if your lens is a zoom or a prime lens (see image below).

Finally, inside the lens is the aperture ring.  This controls the amount of light that passes through the lens to expose the sensor by changing the size of the lens opening.  For most current lenses this is controlled on the camera.  However, some lenses have an additional ring on the lens to let you set this on the lens itself.

The aperture is one of the three pillars of exposure (others are shutter speed and ISO) and it’s important to understand how it works.  This understanding will give you a better idea of the aperture size you want for specific effects.  Whenever you open the aperture to allow for more light you are reducing the amount of focus area in the image.  This focus area is defined as the “depth of field”, or DOF.  Why does it work this way?  Because when you open the aperture you are reducing the amount of area in the “focus cone” (see image below). 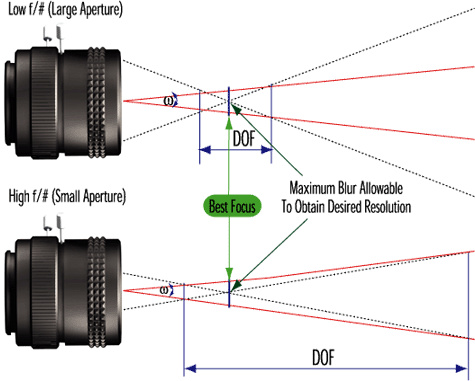 Notice in the first image how the dotted line (representing the size of the aperture) goes outside the focus cone (represented by the red line) rather quickly as you look through the lens.  This illustrates a shallow depth of field.  The second image represents a smaller aperture.  See how the area is much more within the focus cone as you look through the lens.

It’s important to note that the focal length of the lens also determines DOF.  Longer lenses will have a narrower focus cone.  Therefore, longer lenses are more susceptible shallower, or smaller, DOF.  So a large aperture on a long lens will be outside the focus cone much more quickly than with a wide lens.  This is why shooting at F2.8 on wide lenses has a larger DOF that F2.8 on longer lenses.

When light comes through the lens and you press the shutter a couple of important things occur.  First, the mirror raises up to expose the sensor.  However, before the sensor is exposed the shutter must be opened.  The shutter is another pillar of exposure.  The length of time it is open is determined by the setting in the camera.

Understanding how the shutter works is very important for shooting with flash.  Every camera has a specific “sync speed” that coordinates the shutter with the flash.  The sync speed is the fastest shutter speed you can shoot and allow the light from the flash to be exposed to the entire sensor.  If you try to use a faster shutter speed the rear curtain will begin to close before the flash has a chance to expose the light to the sensor and you will have a dark band across one side of your exposure.  When you shoot slower that your sync speed (called “dragging the shutter”) the flash will properly expose the flash to the subject and the slower shutter speed will increase exposure to the ambient light giving you a brighter background.  There are ways to shoot faster than your sync speed, but that’s a discussion for another day.

As the light goes through the shutter the photo cells inside the sensor record the light.  The sensor’s computer analyzes the light and stores the resulting image on the memory card.   How the sensor analyzes the light is, in part, determined by the ISO (International Standards Organization) setting in the camera.  This setting tells the sensor how sensitive it will be to the light coming through the shutter.  The higher the ISO setting the more sensitive the sensor is allowing you to shoot in less light.  Your ISO setting is the third pillar of exposure.  It is always available to help you get a proper balance of light.

It’s important to note that when you are setting the ISO to a higher value it means you’re compensating because there is less light in the image.  When there is less light coming through the shutter there are less photons for the sensor to process.  This means that the sensor must interpolate what the missing photons should be and add them to the image.  Doing this is not a perfect science and many times the added photons are brighter or dimmer than the other photons and appear as noise.  As technology moves forward this science is improving and many cameras can shoot at higher ISO’s without noticeable differences.

At the beginning of this post I indicated that I wanted to give you a high level understanding of how cameras and lenses work.  While the discussion may seem like a lot to digest, if you take each topic separately it’s really very simple.  Maybe you knew it but didn’t really understand it.  Hopefully the discussion helped clarified some things.  I hope that if you don’t quite understand it with the first read that you would use it for future reference.